In January 2020, one of the 3 pine trees in the cemetery was taken down by P.C. Hoag and Company and the remaining two were pruned. A large crane was brought in after the ground froze so as to not disturbed any areas. No graves were traveled over. See photos here
​ 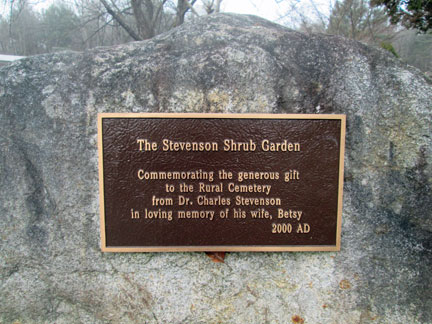 The Stevenson Shrub Garden by the Locke extension entrance was updated in November 2013. The stone with a plaque about the garden was moved to the center and a stonedust path was installed so people can walk into the garden. The garden itself was cleaned up and new shrubs were planted.

The Rural Cemetery Walk & Talk was a great success. Community members met behind the Baptist Meetinghouse on Church Street and were enlightened about the lives and contributions of some of the people buried in the cemetery. Many thanks to hosts Geoff Burrows and Lee Quimby and the presenters that joined them as we toured through the cemetery and reminisced about those who contributed to 250 years of the rich history of Sandwich. (click here for more)

In December 2011, the Rural Cemetery resolved the significant, longtime problem of flooding in the western part of the cemetery.  The annually recurring, springtime flooding of the cemetery sometimes covered many current grave sites and much of that area remained undeveloped and unusable for burial purposes due to the flooding.  Working with an excavating contractor, Randy Brown and Sons, a catch basin was built where the water runs into the cemetery.  Approximately 350 feet of six-inch pipe was installed to redirect the water to an unusable area in the northwest corner of the Meadow area of the cemetery.  This will keep the water off of and out of the way of grave sites and allow us to use more of our grounds for burial sites.  Randy Brown and Sons did a fantastic job; after several substantial rainfalls, we can happily report that the water has been successfully redirected.  A substantial part of the expense of this improvement project will be funded by the donations of our members, and the Association is extremely grateful for the generosity of its supporters. 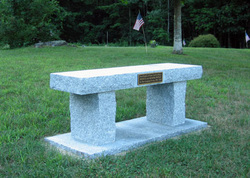 Before the 2010 Annual Meeting a brief ceremony was held by the flag pole to unveil a bench dedicated to the many years of service of Moe and Barbara Bowler. Many of Moe's family were on hand.