History of the Rural Cemetery Association of Sandwich, NH 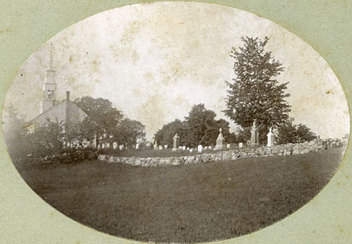 Photo courtesy of Sandwich Historical Society. ca 1920
Nestled behind the Baptist Church on Church Street, the Rural Cemetery, which existed before the church was built in 1792, is indeed a very old "burying ground".  Marked simply by a fieldstone, as was the custom in those days, Ruth Tappan Abbott is the oldest known burial.  She died in 1785.  Dozens of others were also laid to rest long before the Church was built and today their fieldstone markers are mere shadows of what they once were having endured over 300 years of New England weather.

Once the church was built, the cemetery was called the Freewill Baptist Cemetery; however, it had fallen in disrepair.  Quoting from 1898 meeting notes, “…a few women, troubled because of the neglected condition of the burial ground at the rear of the Free Baptist Church and determined to make an effort to improve it…",  - the women did just that and the Rural Cemetery Association had its start.  Mrs. Charles Atwood and Miss E. Sanborn spearheaded the formation of the Rural Cemetery Association, and they promptly and successfully set out to solicit funds and labor to improve the cemetery.  Article IV, Section l of the By-Laws states:  "Any woman may become a member of the Association by payment of twenty-five cents annually.  Any man may become an honorary member by the payment of fifty cents annually."  The Rural Cemetery Association of Center Sandwich, New Hampshire was duly recorded by Ezra S. Stearns, Secretary of State on December 13, 1898. 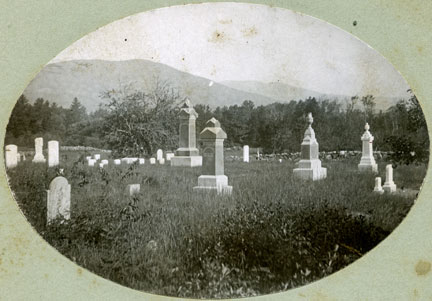 Photo courtesy of Sandwich Historical Society. ca. 1920
There are many prominent people buried in the Rural Cemetery. A few notables are:  Theodore Atkinson, a Revolutionary War Veteran who died in 1842 at the age of 79; Albert Gallantin Hoit (1809-1856) a highly skilled painter; Daniel Greenleaf Beede (1814-1894) Headmaster of Beede Academy and a student of Dudley Leavitt, who was a famous schoolteacher and almanac maker; and Moses Hall who died in 1930, the last person to live year-round in Sandwich Notch.
-Barbara Bowler and Ann Robbins